A Sport with Untapped Potential to Empower Women

A Sport with Untapped Potential to Empower Women 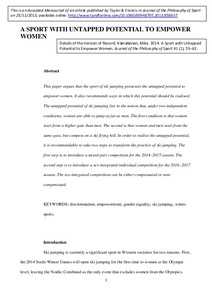 
This paper argues that the sport of ski jumping possesses the untapped potential to empower women. It also recommends ways in which this potential should be realised. The untapped potential of ski jumping lies in the notion that, under two independent conditions, women are able to jump as far as men. The first condition is that women start from a higher gate than men. The second is that women and men start from the same gate, but compete on a ski flying hill. In order to realise the untapped potential, it is recommendable to take two steps to transform the practice of ski jumping. The first step is to introduce a mixed-pair competition for the 2014–2015 season. The second step is to introduce a sex-integrated individual competition for the 2016–2017 season. The sex-integrated competition can be either compensated or non-compensated.