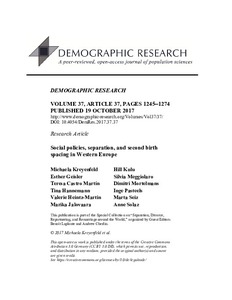 OBJECTIVEThis paper studies postseparation fertility behavior. The aim is to investigate whether, and if so how, separation affects second birth spacing in Western European countries.METHODSThis analysis makes use of rich survey data from Belgium, France, Germany, Italy, Spain, and the United Kingdom, as well as from Finnish register data. We thus cover the behavior of a large proportion of the population of Western Europe. We also use descriptive measures, such as Kaplan. Meier survival functions and cumulative incidence curves. In the multivariate analysis, we employ event history modeling to show how education relates to postseparation fertility behavior.RESULTSThere are large differences in postseparation fertility behavior across European countries. For Spain and Italy, we find that only a negligibly small proportion of the population have a second child after separating from the other parent of the firstborn child. The countries with the highest proportion of second children with a new partner are the United Kingdom, Germany, and Finland. In all countries, separation after first birth leads to a sharp increase in the birth interval between first and second births.CONTRIBUTIONOur study is a contribution to the demographic literature that aims at understanding birth spacing patterns in Western Europe. Furthermore, we draw attention to the role of postseparation policies in explaining country differences in fertility behavior in contemporary societies.