Point of adoption and beyond. Initial trust and mobile-payment continuation intention

Point of adoption and beyond. Initial trust and mobile-payment continuation intention 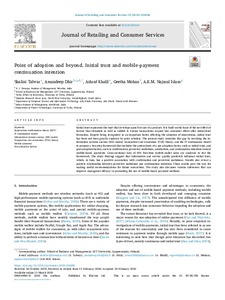 Initial trust represents the trust that develops upon first use of a product. It is built on the basis of the net effect of factors that stimulate as well as inhibit it. Future transactions require less consumer effort after initial-trust formation. Despite being recognized as an important factor affecting the adoption of innovations, initial trust has been not been greatly explored by prior scholars. The present study remedies this gap by invoking the information systems success (ISS) model, transaction cost economics (TCE) theory, and the IT continuance model to propose a two-step framework that includes the antecedents of a pre-adoption factor, such as initial trust, and post-adoption factors, such as confirmation, perceived usefulness, satisfaction, and continuation intention toward mobile-based payments. Cross-sectional data of 954 first-time mobile-wallet users are analyzed to test the framework. The study findings suggest that information and service quality positively influence initial trust, which, in turn, has a positive association with confirmation and perceived usefulness. Results also reveal a positive relationship between perceived usefulness and continuation intention. These results pave the way for making useful recommendations for future researchers. The study also discusses various inferences that can improve managerial efficacy in promoting the use of mobile-based payment methods.