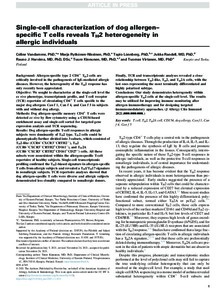 Allergen-specific type 2 CD4+ TH2 cells are critically involved in the pathogenesis of IgE-mediated allergic diseases. However, the heterogeneity of the TH2 response has only recently been appreciated.

We sought to characterize at the single-cell level the ex vivo phenotype, transcriptomic profile, and T-cell receptor (TCR) repertoire of circulating CD4+ T cells specific to the major dog allergens Can f 1, Can f 4, and Can f 5 in subjects with and without dog allergy.

Dog allergen–specific T-cell responses in allergic subjects were dominantly of TH2 type. TH2 cells could be phenotypically further divided into 3 subsets, which consisted of TH2-like (CCR6−CXCR3−CRTH2−), TH2 (CCR6−CXCR3−CRTH2+CD161−), and TH2A (CCR6−CXCR3−CRTH2+CD161+CD27−) cells. All these subsets were nonexistent within the allergen-specific T-cell repertoire of healthy subjects. Single-cell transcriptomic profiling confirmed the TH2-biased signature in allergen-specific T cells from allergic subjects and revealed a TH1/TH17 signature in nonallergic subjects. TCR repertoire analyses showed that dog allergen–specific T cells were diverse and allergic subjects demonstrated less clonality compared to nonallergic donors. Finally, TCR and transcriptomic analyses revealed a close relationship between TH2-like, TH2, and TH2A cells, with the last ones representing the most terminally differentiated and highly polarized subtype.

Our study demonstrates heterogeneity within allergen-specific TH2 cells at the single-cell level. The results may be utilized for improving immune monitoring after allergen immunotherapy and for designing targeted immunomodulatory approaches.