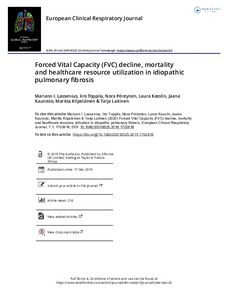 Aim of the study: Potential care implications of antifibrotic reimbursement restrictions were
studied by forced vital capacity (FVC) decline, mortality and specialty care related healthcare
resource utilization in patients with idiopathic pulmonary fibrosis (IPF).
Material and methods: IPF patients were identified from the electronic medical records of the
Hospital District of Southwest Finland between 2005 and 2017. Text-mining was used for patient
identification to exclude other interstitial lung diseases (ILD) from the cohort. FVC reimbursement
restriction (FVC 50-90%) was used for stratification.
Results: Out of all patients with ILD, 27% (N = 266) were identified to have IPF. At baseline, 24%
presented with FVC>90% and 63% with FVC 50-90% predicted. FVC at diagnosis did not improve
during the study period. Median survival decreased by severity from 6.7 years in FVC>90% at
baseline to 0.7 years in patient with FVC<50% predicted. In the FVC>90% group, 14% died before
a change in FVC category could be noted. Overall, 4.7 million euro worth of specialty care
resources were spent on IPF patients. The highest cost driver was inpatient days.
Conclusions: IPF is associated with a high burden of disease, and reimbursement restrictions are
in conflict with early care. As there are antifibrotic treatment options for IPF patients, early diagnosis is important.