Characterization of sedimentary depositional environments for land use and urban planning in Espoo, Finland

Characterization of sedimentary depositional environments for land use and urban planning in Espoo, Finland 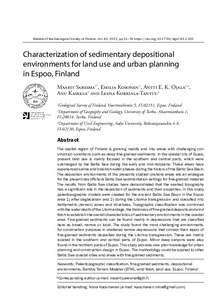 The capital region of Finland is growing rapidly and into areas with challenging construction conditions such as deep fine-grained sediments. In the coastal city of Espoo, present land use is mainly focused in the southern and central parts, which were submerged by the Baltic Sea during the early and mid-Holocene. These areas have experienced saline and brackish water phases during the history of the Baltic Sea Basin. The deposition environments of the presently studied onshore areas are an analogue for the present day offshore Baltic Sea sedimentation settings for fine-grained material. The results from Baltic Sea studies have demonstrated that the seabed topography has a significant role in the deposition of sediments and their properties. In this study, paleotopographic models were created for the ancient Baltic Sea Basin in the Espoo area 1) after deglaciation and 2) during the Litorina transgression and classified into bathymetric (terrain) zones and structures. Topographic classification was combined with the water depth of the Litorina stage, the thickness of fine-grained deposits and wind fetch to establish the overall characteristics of sedimentary environments in the coastal area. Fine-grained sediments can be found mainly in depressions that are classified here as broad, narrow or local. The study found the most challenging environments for construction purposes in sheltered narrow depressions that contain thick layers of fine-grained sediments deposited during the Litorina transgression. These are mainly located in the southern and central parts of Espoo. Minor deep canyons were also found in the northern parts of Espoo. This study provides new prior knowledge for urban planning and construction design in Espoo. The methodology could be applied to other Baltic Sea coastal cities and areas with fine-grained sediments.