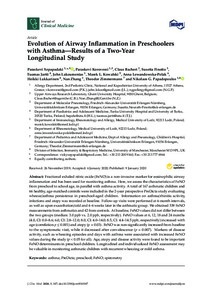 Fractional exhaled nitric oxide (FeNO) is a non-invasive marker for eosinophilic airway inflammation and has been used for monitoring asthma. Here, we assess the characteristics of FeNO from preschool to school age, in parallel with asthma activity. A total of 167 asthmatic children and 66 healthy, age-matched controls were included in the 2-year prospective PreDicta study evaluating wheeze/asthma persistence in preschool-aged children. Information on asthma/rhinitis activity, infections and atopy was recorded at baseline. Follow-up visits were performed at 6-month intervals, as well as upon exacerbation/cold and 4-6 weeks later in the asthmatic group. We obtained 539 FeNO measurements from asthmatics and 42 from controls. At baseline, FeNO values did not differ between the two groups (median: 3.0 ppb vs. 2.0 ppb, respectively). FeNO values at 6, 12, 18 and 24 months (4.0, CI: 0.0-8.6; 6.0, CI: 2.8-12.0; 8.0, CI: 4.0-14.0; 8.5, CI: 4.4-14.5 ppb, respectively) increased with age (correlation p <= 0.001) and atopy (p = 0.03). FeNO was non-significantly increased from baseline to the symptomatic visit, while it decreased after convalescence (p = 0.007). Markers of disease activity, such as wheezing episodes and days with asthma were associated with increased FeNO values during the study (p < 0.05 for all). Age, atopy and disease activity were found to be important FeNO determinants in preschool children. Longitudinal and individualized FeNO assessment may be valuable in monitoring asthmatic children with recurrent wheezing or mild asthma.