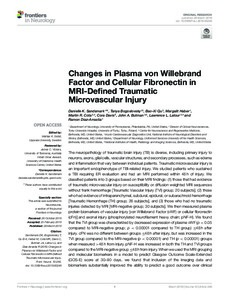 The neuropathology of traumatic brain injury (TB) is diverse, including primary injury to neurons, axons, glial cells, vascular structures, and secondary processes, such as edema and inflammation that vary between individual patients. Traumatic microvascular injury is an important endophenotype of TBI-related injury. We studied patients who sustained a TBI requiring ER evaluation and had an MRI performed within 48 h of injury. We classified patients into 3 groups based on their MRI findings: (1) those that had evidence of traumatic microvascular injury on susceptibility or diffusion weighted MRI sequences without frank hemorrhage [Traumatic Vascular Injury (TVI) group; 20 subjects]. (2) those who had evidence of intraparenchymal, subdural, epidural, or subarachnoid hemorrhage [Traumatic Hemorrhage (TH) group; 26 subjects], and (3) those who had no traumatic injuries detected by MRI [MRI-negative group; 30 subjects]. We then measured plasma protein biomarkers of vascular injury [von Willebrand Factor (vWF) or cellular fibronectin (cFn)] and axonal injury (phosphorylated neurofilament heavy chain; pNF-H). We found that the TVI group was characterized by decreased expression of plasma vWF (p < 0.05 compared to MRI-negative group; p < 0.00001 compared to TH group) <= 48 h after injury. cFN was no different between groups <= 48 h after injury, but was increased in the TVI group compared to the MRI-negative (p < 0.00001) and TH (p < 0.00001) groups when measured <= 48 h from injury. pNF-H was increased in both the TH and TVI groups compared to the MRI-negative group <= 48 h from injury. When we used the MRI grouping and molecular biomarkers in a model to predict Glasgow Outcome Scale-Extended (GOS-E) score at 30-90 days, we found that inclusion of the imaging data and biomarkers substantially improved the ability to predict a good outcome over clinical information alone. These data indicate that there is a distinct, vascular-predominant endophenotype in a subset of patients who sustain a TBI and that these injuries are characterized by a specific biomarker profile. Further work to will be needed to determine whether these biomarkers can be useful as predictive and pharmacodynamic biomarkers for vascular-directed therapies after TBI.