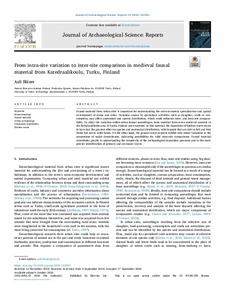 Faunal material from urban sites is important for understanding the socio-economic specialisation and spatial development of towns and cities. Variation caused by specialised activities, such as slaughter, crafts or consumption, may affect anatomical and species distribution, which could influence inter- and intra-site comparability. To study the variation within urban faunal assemblages, bone material from seven medieval contexts in the Katedraalikoulu area of Turku, Finland was examined. In this material, the deposition of kitchen waste seems to have had the greatest effect on species and anatomical distribution, with deposits that are rich in fish and bird bones but not in cattle bones. On the other hand, the general waste deposits exhibit only minor variations in the proportions of major domesticates, indicating possibilities for valid inter-site comparisons. Faunal material contributes greatly to understanding the complexity of the archaeological deposition processes and to the more precise identification of primary and secondary layers.