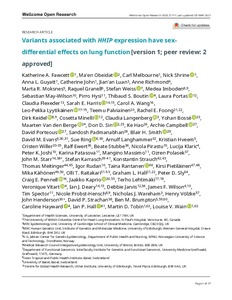 Background: Lung function is highly heritable and differs between the sexes throughout life. However, little is known about sex-differential genetic effects on lung function. We aimed to conduct the first genome-wide genotype-by-sex interaction study on lung function to identify genetic effects that differ between males and females. Methods: We tested for interactions between 7,745,864 variants and sex on spirometry-based measures of lung function in UK Biobank (N=303,612), and sought replication in 75,696 independent individuals from the SpiroMeta consortium. Results: Five independent single-nucleotide polymorphisms (SNPs) showed genome-wide significant (P<5x10 -8) interactions with sex on lung function, and 21 showed suggestive interactions (P<1x10 -6). The strongest signal, from rs7697189 (chr4:145436894) on forced expiratory volume in 1 second (FEV 1) (P=3.15x10 -15), was replicated (P=0.016) in SpiroMeta. The C allele increased FEV 1 more in males (untransformed FEV 1 β=0.028 [SE 0.0022] litres) than females (β=0.009 [SE 0.0014] litres), and this effect was not accounted for by differential effects on height, smoking or pubertal age. rs7697189 resides upstream of the hedgehog-interacting protein ( HHIP) gene and was previously associated with lung function and HHIP lung expression. We found HHIP expression was significantly different between the sexes (P=6.90x10 -6), but we could not detect sex differential effects of rs7697189 on expression. Conclusions: We identified a novel genotype-by-sex interaction at a putative enhancer region upstream of the HHIP gene. Establishing the mechanism by which HHIP SNPs have different effects on lung function in males and females will be important for our understanding of lung health and diseases in both sexes. © 2020 Fawcett KA et al.