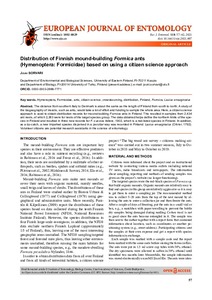 The distance from southern Italy to Denmark is about the same as the length of Finland from south to north. A study of the biogeography of insects, such as ants, would take a lot of effort and funding to sample the whole area. Here, a citizen science approach is used to obtain distribution records for mound-building Formica ants in Finland. This resulted in samples from 2,434 ant nests, of which 2,363 were for nests of the target species group. The data obtained helps define the northern limits of the species in Finland and resulted in three new records for F suecica Adlerz, 1902, which is a red-listed species in Finland. In addition, as a by-catch, a new imported species dispersed in a peculiar way was recorded in Finland: Lasius emarginatus (Olivier, 1792). Volunteer citizens are potential research assistants in the science of entomology.