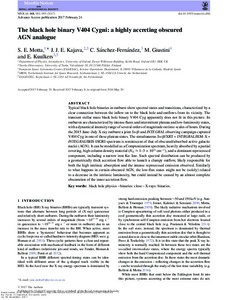 Typical black hole binaries in outburst show spectral states and transitions, characterized by a clear connection between the inflow on to the black hole and outflows from its vicinity. The transient stellar mass black hole binary V404 Cyg apparently does not fit in this picture. Its outbursts are characterized by intense flares and intermittent plateau and low-luminosity states, with a dynamical intensity range of several orders of magnitude on time-scales of hours. During the 2015 June-July X-ray outburst a joint Swift and INTEGRAL observing campaign captured V404 Cyg in one of these plateau states. The simultaneous Swift/XRT + INTRGRAL/JEM-X + INTEGRAL/IBIS-ISGRI spectrum is reminiscent of that of obscured/absorbed active galactic nuclei (AGN). It can be modelled as a Comptonization spectrum, heavily absorbed by a partial covering, high column density material (N-H approximate to 1-3 x 10(24) cm(-2)), and a dominant reprocessed component, including a narrow iron K alpha line. Such spectral distribution can be produced by a geometrically thick accretion flow able to launch a clumpy outflow, likely responsible for both the high intrinsic absorption and the intense reprocessed emission observed. Similarly to what happens in certain obscured AGN, the low-flux states might not be (solely) related to a decrease in the intrinsic luminosity, but could instead be caused by an almost complete obscuration of the inner accretion flow.