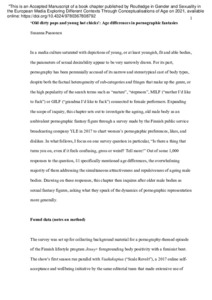 As a genre, pornography has long highlighted embodied differences and
juxtaposed different bodies in terms of their size, degrees of hairiness
or muscularity, skin colour and tone. Building on a 2017 survey
charting pornographic preferences, likes and dislikes among Finnish
women, this chapter focuses on age differences in particular and
investigates the ageing male body as an ambivalent, simultaneously
attractive and repulsive pornographic fantasy figure. It asks how age
differences feed into dynamics of control and submission in pornographic
imageries, how ageing bodies function as markers of extremity and
authenticity and how the survey respondents, the majority of them in
their twenties and thirties, negotiate gaps between their pornographic
preferences and other sexual likes. Emphasising the specific role and
function of sexual fantasies, the respondents describe the appeal of
older male bodies as sites of disgust and taboo transgression to be
enjoyed from a distance, and the scenarios they enjoy as drawing their
force from social hierarchies and from breeching the norms of sexual
acceptability and normalcy.