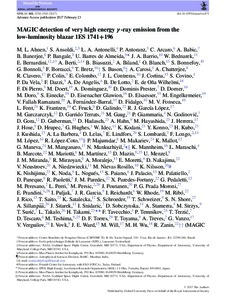 We present the first detection of the nearby (z = 0.084) low-luminosity BL Lac object 1ES 1741+196 in the very high energy (E > 100 GeV) band. This object lies in a triplet of interacting galaxies. Early predictions had suggested 1ES 1741+196 to be, along with several other high-frequency BL Lac sources, within the reach of MAGIC detectability. Its detection by MAGIC, later confirmed by VERITAS, helps to expand the small population of known TeV BL Lacs. The source was observed with the MAGIC telescopes between 2010 April and 2011 May, collecting 46 h of good quality data. These observations led to the detection of the source at 6.0 s confidence level, with a steady flux F(> 100 GeV) = (6.4 +/- 1.7(stat) +/- 2.6(syst)) x 10-12 ph cm(-2)s(-1) and a differential spectral photon index Gamma = 2.4 +/- 0.2(stat) +/- 0.2(syst) in the range of similar to 80 GeV-3 TeV. To study the broad-band spectral energy distribution (SED) simultaneous with MAGIC observations, we use KVA, Swift/UVOT and XRT and Fermi/LAT data. One-zone synchrotron-self-Compton (SSC) modelling of the SED of 1ES 1741+196 suggests values for the SSC parameters that are quite common among known TeV BL Lacs except for a relatively low Doppler factor and slope of electron energy distribution. A thermal feature seen in the SED is well matched by a giant elliptical's template. This appears to be the signature of thermal emission from the host galaxy, which is clearly resolved in optical observations.