Periosteal fasciitis in a 7-year old girl: a diagnostic dilemma

Periosteal fasciitis in a 7-year old girl: a diagnostic dilemma 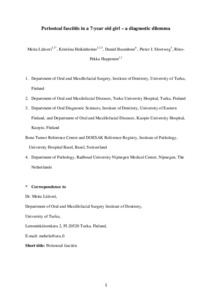 Periosteal fasciitis, considered a subtype of nodular fasciitis, is a rare benign soft tissue mass often misdiagnosed as a malignant lesion due to its fast and infiltrative growth pattern and histological features. Nodular fasciitis is usually found in the upper extremities in adults and in the head and neck region in children. Incorrect diagnosis may lead to overtreatment, potentially causing disturbed orofacial development in growing children. A rapidly growing asymptomatic mass, initially suspected to be a malignant bone tumour, was found in the left angle area of the mandible in a healthy 7-year-old girl. Radiographic examination revealed an exophytic, expansile and destructive nodule arising from the periosteal region. A diagnosis of periosteal fasciitis was established based on histological findings in an open biopsy specimen and the lesion was subsequently enucleated. Fluorescence in situ hybridization analysis revealed a USP6 gene rearrangement and confirmed the diagnosis molecularly. Due to the aggressive growth pattern without external trauma and the results of the gene rearrangement test, it is suggested that nodular fasciitis be regarded as a benign neoplasm rather than as a reactive process. The patient remains free of disease at 3 years after surgery.