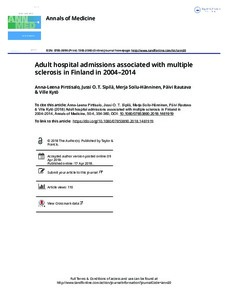 Introduction: Treatment of multiple sclerosis (MS) has developed significantly and several new immunotherapeutic drugs have become available in Finland since 2004. We studied whether this is associated with changes in hospital admission frequencies and healthcare costs and whether admission rates due to infection have increased.Methods: The national Care Register for Health Care was searched for all discharges from neurological, medical, surgical, neurosurgical and intensive care units with MS as a primary diagnosis or an auxiliary diagnosis for primary infection diagnosis in 2004-2014. Only patients >= 16 years of age were included.Results: We identified 12,276 hospital admissions for 4296 individuals. The number of admissions declined by 4.6% annually (p = .0024) in both genders. Proportion of admissions with an infection as the primary diagnosis increased but no change in their frequency was found. They were longer than admissions with MS as the primary diagnosis and were associated with increased in-hospital mortality. The annual aggregate cost of hospital admissions declined by 51% during the study period.Conclusions: This study shows that hospital admission rates and costs related to MS hospital admissions have markedly declined from 2004 to 2014 in Finland, which coincides with an increase in the use of disease-modifying therapies.