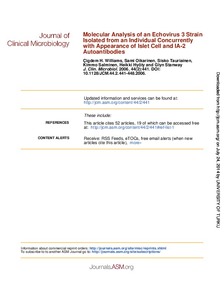 Growing evidence has implicated members of the genus Enterovirus of the family Picornaviridae in the etiology of some cases of type I diabetes (T1D). To contribute to an understanding of the molecular determinants underlying this association, we determined the complete nucleotide sequence of a strain of echovirus 3 (E3), Human enterovirus B (HEV-B) species, isolated from an individual who soon after virus isolation developed autoantibodies characteristic of T1D. The individual has remained positive for over 6 years for tyrosine phosphatase-related IA-2 protein autoantibodies and islet cell autoantibodies, indicating an ongoing autoimmune process, although he has not yet developed clinical T1D. The sequence obtained adds weight to the observation that recent enterovirus isolates differ significantly from prototype strains and provides further evidence of a role for recombination in enterovirus evolution. In common with most HEV-B species members, the isolate exhibits 2C and VP1 sequences suggested as triggers of autoimmunity through molecular mimicry. However, comparisons with the E3 prototype strain and previously reported diabetogenic and nondiabetogenic HEV-B strains do not reveal clear candidates for sequence features of PicoBank/DM1/E3 that could be associated with autoantibody appearance. This is the first time a virus strain isolated at the time of commencement of beta-cell damage has been analyzed and is an invaluable addition to enterovirus strains isolated previously at the onset of T1D in the search for specific molecular features which could be associated with diabetes induction.