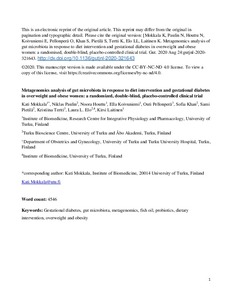 Objective: Gut microbiota and diet are known to contribute to human metabolism. We investigated whether the metagenomic gut microbiota composition and function changes over pregnancy are related to gestational diabetes mellitus (GDM) and can be modified by dietary supplements, fish oil and/or probiotics.

Results: Unlike women with GDM, women without GDM manifested changes in relative abundance of bacterial species over the pregnancy, particularly those receiving the fish oil + probiotics combination. The specific bacterial species or function did not predict the onset of GDM nor did it differ according to GDM status, except for the higher abundance of Ruminococcus obeum in late pregnancy in the combination group in women with GDM compared with women without GDM. In the combination group, weak decreases over the pregnancy were observed in basic bacterial housekeeping functions.

Conclusions: The specific gut microbiota species do not contribute to GDM in overweight/obese women. Nevertheless, the GDM status may disturb maternal gut microbiota flexibility and thus limit the capacity of women with GDM to respond to diet, as evidenced by alterations in gut microbiota observed only in women without GDM. These findings may be important when considering the metabolic complications during pregnancy, but further studies with larger populations are called for to verify the findings.