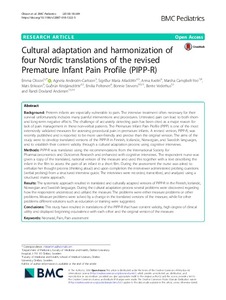 Preterm infants are especially vulnerable to pain. The intensive treatment often necessary for their survival unfortunately includes many painful interventions and procedures. Untreated pain can lead to both short- and long-term negative effects. The challenge of accurately detecting pain has been cited as a major reason for lack of pain management in these non-verbal patients. The Premature Infant Pain Profile (PIPP) is one of the most extensively validated measures for assessing procedural pain in premature infants. A revised version, PIPP-R, was recently published and is reported to be more user-friendly and precise than the original version. The aims of the study were to develop translated versions of the PIPP-R in Finnish, Icelandic, Norwegian, and Swedish languages, and to establish their content validity through a cultural adaptation process using cognitive interviews.

PIPP-R was translated using the recommendations from the International Society for Pharmacoeconomics and Outcomes Research and enhanced with cognitive interviews. The respondent nurse was given a copy of the translated, national version of the measure and used this together with a text describing the infant in the film to assess the pain of an infant in a short film. During the assessment the nurse was asked to verbalize her thought process (thinking aloud) and upon completion the interviewer administered probing questions (verbal probing) from a structured interview guide. The interviews were recorded, transcribed, and analyzed using a structured matrix approach.

The systematic approach resulted in translated and culturally adapted versions of PIPP-R in the Finnish, Icelandic, Norwegian and Swedish languages. During the cultural adaptation process several problems were discovered regarding how the respondent understood and utilized the measure. The problems were either measure problems or other problems. Measure problems were solved by a change in the translated versions of the measure, while for other problems different solutions such as education or training were suggested.

This study have resulted in translations of the PIPP-R that have content validity, high degree of clinical utility and displayed beginning equivalence with each other and the original version of the measure.