Lack of evidence-the anti-stepwise introduction of metal-on-metal hip replacements: A systematic review and a comparative assessment of the literature and registry data

Lack of evidence-the anti-stepwise introduction of metal-on-metal hip replacements: A systematic review and a comparative assessment of the literature and registry data 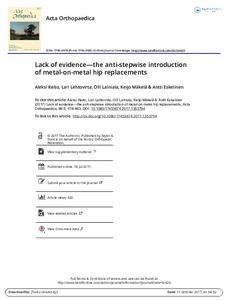 Background and purpose - Orthopedics and especially joint replacement surgery have had more than their fair share of unsuccessful innovations that have violated widely endorsed principles for the introduction of new surgical innovations. We aimed to investigate (1) the trends in the use of the Birmingham Hip Resurfacing (BHR), the ASR hip resurfacing (ASR HRA) and the ASR XL total hip replacement (ASR XL THR) system with very different market approval processes and (2) whether their use was corroborated by clinical trials published in the peer-reviewed literature.Methods - The literature was searched for any clinical studies that reported outcomes of the BHR, ASR HRA and ASR XL THRs. Data from 7 national hip arthroplasty registers were collected and the number of annually implanted devices was matched to those reported in the literature.Results - The cumulative number of implanted and published BHRs grew proportionally with a small lag. The growth of implanted BHRs started to decline at the same time as the ASR HR was introduced. With regard to ASR HRAs, the cumulative proportion of implanted hips and those included in the published studies grew disproportionately after the introduction of the ASR in 2003. For ASR XL THRs, the disproportionality is even higher.Interpretation - The adoption of ASR hip replacements did not follow the proposed stepwise introduction of orthopedic implants. The adoption and use of any new implant should follow a strict guideline and algorithm even if the theoretical basis or the results of preclinical studies are excellent.