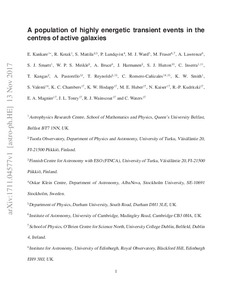 Recent all-sky surveys have led to the discovery of new types of
transients. These include stars disrupted by the central supermassive
black hole, and supernovae that are 10-100 times more energetic than
typical ones. However, the nature of even more energetic transients that
apparently occur in the innermost regions of their host galaxies is
hotly debated1-3. Here we report the discovery of the most
energetic of these to date: PS1-10adi, with a total radiated energy of
2.3 × 1052 erg. The slow evolution of its light curve
and persistently narrow spectral lines over ˜ 3 yr are
inconsistent with known types of recurring black hole variability. The
observed properties imply powering by shock interaction between
expanding material and large quantities of surrounding dense matter.
Plausible sources of this expanding material are a star that has been
tidally disrupted by the central black hole, or a supernova. Both could
satisfy the energy budget. For the former, we would be forced to invoke
a new and hitherto unseen variant of a tidally disrupted star, while a
supernova origin relies principally on environmental effects resulting
from its nuclear location. Remarkably, we also discover that PS1-10adi
is not an isolated case. We therefore surmise that this new population
of transients has previously been overlooked due to incorrect
association with underlying central black hole activity.