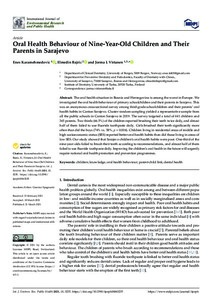 The oral health situation in Bosnia and Herzegovina is among the worst in Europe. We investigated the oral health behaviour of primary schoolchildren and their parents in Sarajevo. This was an anonymous cross-sectional survey among third-grade schoolchildren and their parents’ oral health habits in Canton Sarajevo. Cluster random sampling yielded a representative sample from all the public schools in Canton Sarajevo in 2019. The survey targeted a total of 441 children and 365 parents. Two thirds (66.5%) of the children reported brushing their teeth twice daily, and almost half of them failed to use fluoride toothpaste daily. Girls brushed their teeth significantly more often than did the boys (74% vs. 58%, p = 0.004). Children living in residential areas of middle and high socioeconomic status (SES) reported better oral health habits than did those living in areas of low SES. Our study showed that Sarajevo children’s oral health habits were poor. One-third of the nine-year-olds failed to brush their teeth according to recommendations, and almost half of them failed to use fluoride toothpaste daily. Improving the children’s oral health in the future will urgently require national oral health promotion and prevention programmes.