Bioaerosols in the atmosphere at two sites in Northern Europe in spring 2021: Outline of an experimental campaign

Bioaerosols in the atmosphere at two sites in Northern Europe in spring 2021: Outline of an experimental campaign 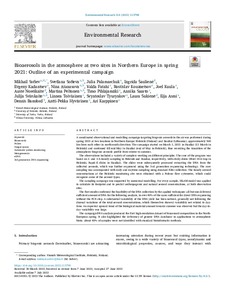 A coordinated observational and modelling campaign targeting biogenic aerosols in the air was performed during spring 2021 at two locations in Northern Europe: Helsinki (Finland) and Siauliai (Lithuania), approximately 500 km from each other in north-south direction. The campaign started on March 1, 2021 in Siauliai (12 March in Helsinki) and continued till mid-May in Siauliai (end of May in Helsinki), thus recording the transition of the atmospheric biogenic aerosols profile from winter to summer.

The observations included a variety of samplers working on different principles. The core of the program was based on 2- and 2.4--hourly sampling in Helsinki and Siauliai, respectively, with sticky slides (Hirst 24-h trap in Helsinki, Rapid-E slides in Siauliai). The slides were subsequently processed extracting the DNA from the collected aerosols, which was further sequenced using the 3-rd generation sequencing technology. The core sampling was accompanied with daily and daytime sampling using standard filter collectors. The hourly aerosol concentrations at the Helsinki monitoring site were obtained with a Poleno flow cytometer, which could recognize some of the aerosol types.

The sampling campaign was supported by numerical modelling. For every sample, SILAM model was applied to calculate its footprint and to predict anthropogenic and natural aerosol concentrations, at both observation sites.

The first results confirmed the feasibility of the DNA collection by the applied techniques: all but one delivered sufficient amount of DNA for the following analysis, in over 40% of the cases sufficient for direct DNA sequencing without the PCR step. A substantial variability of the DNA yield has been noticed, generally not following the diurnal variations of the total-aerosol concentrations, which themselves showed variability not related to daytime. An expected upward trend of the biological material amount towards summer was observed but the day-to-day variability was large.

The campaign DNA analysis produced the first high-resolution dataset of bioaerosol composition in the North-European spring. It also highlighted the deficiency of generic DNA databases in applications to atmospheric biota: about 40% of samples were not identified with standard bioinformatic methods.