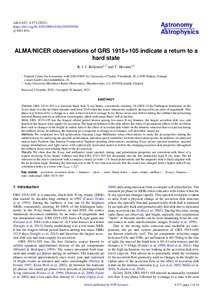 Context. GRS 1915 +105 is a transient black hole X-ray binary consistently emitting 10-100% of the Eddington luminosity in the X-ray band over the last three decades until mid-2018 when the source luminosity suddenly decreased by an order of magnitude. This phase was followed by a change to a state with even lower average X-ray fluxes never seen before during the outburst but presenting renewed flaring activity at di fferent wavelengths, albeit with mean fluxes still in decline.Aims. GRS 1915 +105 has the longest orbital period known among low-mass X-ray binaries, the largest accretion disk size, and therefore the largest mass supply for accretion. The high inclination of the disk allows the study of geometrical e ffects of the accretion flow such as changes in the height-to-radius ratio or the e ffect of accretion disk winds on the intrinsic emission that is expected during the outburst decay. In addition, the transient jet is expected to change to a compact, self-absorbed, steady jet.Methods. We conducted two full polarization Atacama Large Millimeter Array observations to study the jet properties during the outburst decay by analyzing the spectral, polarization, and intra-epoch variability for both observation epochs. In addition, we analyzed almost daily Neutron Star Interior Composition Explorer pointing observations, modeling X-ray power spectral densities, spectral energy distributions, and light curves with a physically motivated model to follow the changing accretion disk properties throughout the outburst decay and relating them to the jet emission.Results. We show that the X-ray and millimeter (mm) spectral, timing, and polarization properties are consistent with those of a typical decaying X-ray binary outburst and that GRS 1915 +105 has descended into the low-luminosity hard X-ray state. The jet emission in the mm is consistent with a compact, steady jet with similar to 1% linear polarization, and the magnetic field is likely aligned with the jet position angle. Relating the mm emission to the X-ray emission reveals that the source has changed from a higher radio /X-ray correlation index to a lower one; L-radio proportional to L-X(0.6).