Physical activity from childhood to adulthood and cognitive performance in midlife

Physical activity from childhood to adulthood and cognitive performance in midlife 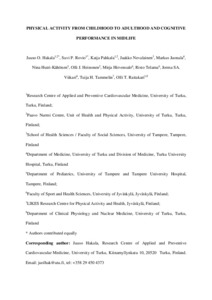 Methods: This study is a part of the Cardiovascular Risk in Young Finns Study. Since 1980, a population-basedcohort of 3,596 children (age 3-18 years) have been followed-up in 3-9-year intervals. PA has been queried in all study phases. Cumulative PA was determined in childhood (age 6-12 years), adolescence (age 12-18 years), young adulthood (age 18-24 years) and adulthood (age 24-37 years). Cognitive performance was assessed using computerized neuropsychological test, CANTAB®, (N=2,026, age 34-39 years) in 2011.

Conclusion: Cumulative exposure to PA from childhood to adulthood was found to be associated with better midlife reaction time. Furthermore, cumulative PA exposure in young adulthood and adulthood was associated with better visual processing and sustained attention in men. All associations were independent of participants PA level in other measured age frames. Therefore, a physically active lifestyle should be adopted already in childhood, adolescence and young adulthood and continued into midlife to ensure the plausible benefits of PA on midlife cognitive performance.