Molecular, behavioural and morphological comparisons of sperm adaptations in a fish with alternative reproductive tactics

Molecular, behavioural and morphological comparisons of sperm adaptations in a fish with alternative reproductive tactics 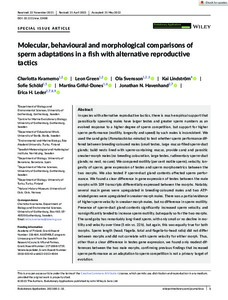 In species with alternative reproductive tactics, there is much empirical support that parasitically spawning males have larger testes and greater sperm numbers as an evolved response to a higher degree of sperm competition, but support for higher sperm performance (motility, longevity and speed) by such males is inconsistent. We used the sand goby (Pomatoschistus minutus) to test whether sperm performance differed between breeding-coloured males (small testes, large mucus-filled sperm-duct glands; build nests lined with sperm-containing mucus, provide care) and parasitic sneaker-morph males (no breeding colouration, large testes, rudimentary sperm-duct glands; no nest, no care). We compared motility (per cent motile sperm), velocity, longevity of sperm, gene expression of testes and sperm morphometrics between the two morphs. We also tested if sperm-duct gland contents affected sperm performance. We found a clear difference in gene expression of testes between the male morphs with 109 transcripts differentially expressed between the morphs. Notably, several mucin genes were upregulated in breeding-coloured males and two ATP-related genes were upregulated in sneaker-morph males. There was a partial evidence of higher sperm velocity in sneaker-morph males, but no difference in sperm motility. Presence of sperm-duct gland contents significantly increased sperm velocity, and nonsignificantly tended to increase sperm motility, but equally so for the two morphs. The sand goby has remarkably long-lived sperm, with only small or no decline in motility and velocity over time (5 min vs. 22 h), but again, this was equally true for both morphs. Sperm length (head, flagella, total and flagella-to-head ratio) did not differ between morphs and did not correlate with sperm velocity for either morph. Thus, other than a clear difference in testes gene expression, we found only modest differences between the two male morphs, confirming previous findings that increased sperm performance as an adaptation to sperm competition is not a primary target of evolution.