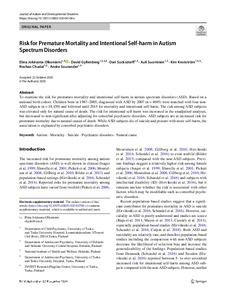 To examine the risk for premature mortality and intentional self-harm in
autism spectrum disorders (ASD). Based on a national birth cohort.
Children born in 1987-2005, diagnosed with ASD by 2007 (n = 4695) were
matched with four non-ASD subjects (n = 18,450) and followed until 2015
for mortality and intentional self-harm. The risk among ASD subjects was
elevated only for natural cause of death. The risk for intentional
self-harm was increased in the unadjusted analyses, but decreased to
non-significant after adjusting for comorbid psychiatric disorders. ASD
subjects are at increased risk for premature mortality due to natural
causes of death. While ASD subjects die of suicide and present with more
self-harm, the association is explained by comorbid psychiatric
disorders.