Soviet Cultural Diplomacy with Scandinavians after the Great Terror: VOKS and Visitors from Denmark and Norway in 1939

Soviet Cultural Diplomacy with Scandinavians after the Great Terror: VOKS and Visitors from Denmark and Norway in 1939 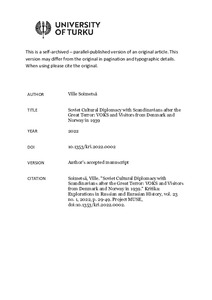 This article analyzes Soviet cultural diplomacy in Scandinavia shortly before the outbreak of World War II. The focus is on exchanges between the key Soviet organization for cultural diplomacy, the All-Union Society for Cultural Ties Abroad (VOKS) and select Danish and Norwegian journalists and writers. While utilizing sources from Russian and Scandinavian archival collections to examine four such exchanges in detail, the article discusses continuities and changes in how VOKS worked to transnationally develop and disseminate a positive and controlled image of Soviet society by hosting foreign intellectuals after the purges of the Great Terror of 1937–38 and before June 1941. By expanding on previous research and highlighting the perspectives of the hosts and their guests, the analysis contributes to our broader understanding of the elements in Soviet cultural diplomacy that continued to function through the purges and were reciprocal even if asymmetrical.