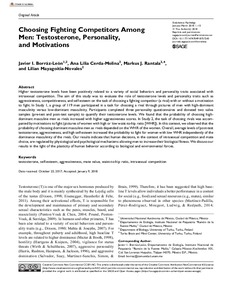 Higher testosterone levels have been positively related to a variety of social behaviors and personality traits associated with intrasexual competition. The aim of this study was to evaluate the role of testosterone levels and personality traits such as aggressiveness, competitiveness, and self-esteem on the task of choosing a fighting competitor (a rival) with or without a motivation to fight. In Study 1, a group of 119 men participated in a task for choosing a rival through pictures of men with high-dominant masculinity versus low-dominant masculinity. Participants completed three personality questionnaires and donated two saliva samples (pre-test and post-test sample) to quantify their testosterone levels. We found that the probability of choosing high-dominant masculine men as rivals increased with higher aggressiveness scores. In Study 2, the task of choosing rivals was accompanied by motivations to fight (pictures of women with high or low waist-to-hip ratio [WHR]). In this context, we observed that the probability of choosing dominant masculine men as rivals depended on the WHR of the women. Overall, average levels of post-test testosterone, aggressiveness, and high self-esteem increased the probability to fight for women with low WHR independently of the dominance masculinity of the rivals. Our results indicate that human decisions, in the context of intrasexual competition and mate choice, are regulated by physiological and psychological mechanisms allowing men to increase their biological fitness. We discuss our results in the light of the plasticity of human behavior according to biological and environmental forces.