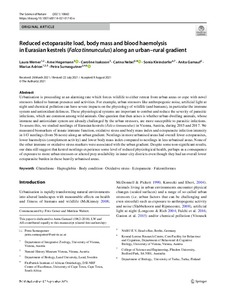 Urbanisation is proceeding at an alarming rate which forces wildlife to either retreat from urban areas or cope with novel stressors linked to human presence and activities. For example, urban stressors like anthropogenic noise, artificial light at night and chemical pollution can have severe impacts on the physiology of wildlife (and humans), in particular the immune system and antioxidant defences. These physiological systems are important to combat and reduce the severity of parasitic infections, which are common among wild animals. One question that then arises is whether urban-dwelling animals, whose immune and antioxidant system are already challenged by the urban stressors, are more susceptible to parasitic infections. To assess this, we studied nestlings of Eurasian kestrels (Falco tinnunculus) in Vienna, Austria, during 2015 and 2017. We measured biomarkers of innate immune function, oxidative stress and body mass index and ectoparasite infection intensity in 143 nestlings (from 56 nests) along an urban gradient. Nestlings in more urbanised areas had overall fewer ectoparasites, lower haemolysis (complement activity) and lower body mass index compared to nestlings in less urbanised areas. None of the other immune or oxidative stress markers were associated with the urban gradient. Despite some non-significant results, our data still suggest that kestrel nestlings experience some level of reduced physiological health, perhaps as a consequence of exposure to more urban stressors or altered prey availability in inner-city districts even though they had an overall lower ectoparasite burden in these heavily urbanised areas.