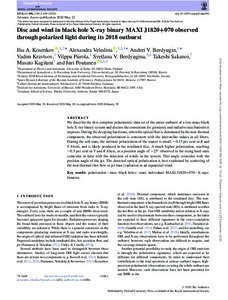 We describe the first complete polarimetric data set of the entire outburst of a low-mass black hole X-ray binary system and discuss the constraints for geometry and radiative mechanisms it imposes. During the decaying hard state, when the optical flux is dominated by the non-thermal component, the observed polarization is consistent with the interstellar values in all filters. During the soft state, the intrinsic polarization of the source is small, similar to 0.15 per cent in B and V filters, and is likely produced in the irradiated disc. A much higher polarization, reaching similar to 0.5 per cent in V and R filters, at a position angle of similar to 25 degrees observed in the rising hard state coincides in time with the detection of winds in the system. This angle coincides with the position angle of the jet. The detected optical polarization is best explained by scattering of the non-thermal (hot flow or jet base) radiation in an equatorial wind.