How Toxic is Public Debt?

How Toxic is Public Debt? 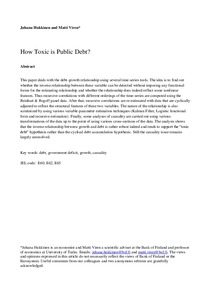 This paper deals with the debt-growth relationship using several time-series tools. The idea is to find out whether the inverse relationship between these variables can be detected without imposing any functional forms on the estimating relationship and whether the relationship does indeed reflect some nonlinear features. Thus recursive correlations with different orderings of the time-series are computed using the Reinhart and Rogoff panel data. After that, recursive correlations are re-estimated with data that are cyclically adjusted to reflect the structural features of the two variables. The nature of the relationship is also scrutinised using several variable-parameter estimation techniques (Kalman filter, logistic functional form and recursive estimation). Finally, some causality analyses are carried out using various transformations of the data up to the point of cross-sections of data. The analysis shows that the inverse relationship between growth and debt is indeed quite robust and tends to support the 'toxic debt' hypothesis rather than the cyclical debt accumulation hypothesis. Yet the causality issue remains largely unresolved.