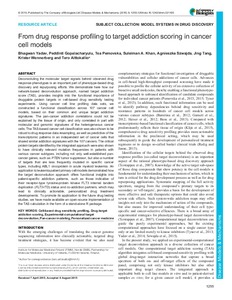 Deconvoluting the molecular target signals behind observed drug response phenotypes is an important part of phenotype-based drug discovery and repurposing efforts. We demonstrate here how our network-based deconvolution approach, named target addiction score (TAS), provides insights into the functional importance of druggable protein targets in cell-based drug sensitivity testing experiments. Using cancer cell line profiling data sets, we constructed a functional classification across 107 cancer cell models, based on their common and unique target addiction signatures. The pan-cancer addiction correlations could not be explained by the tissue of origin, and only correlated in part with molecular and genomic signatures of the heterogeneous cancer cells. The TAS-based cancer cell classification was also shown to be robust to drug response data resampling, as well as predictive of the transcriptomic patterns in an independent set of cancer cells that shared similar addiction signatures with the 107 cancers. The critical protein targets identified by the integrated approach were also shown to have clinically relevant mutation frequencies in patients with various cancer subtypes, including not only well-established pan-cancer genes, such as PTEN tumor suppressor, but also a number of targets that are less frequently mutated in specific cancer types, including ABL1 oncoprotein in acute myeloid leukemia. An application to leukemia patient primary cell models demonstrated how the target deconvolution approach offers functional insights into patient-specific addiction patterns, such as those indicative of their receptor-type tyrosine-protein kinase FLT3 internal tandem duplication (FLT3-ITD) status and co-addiction partners, which may lead to clinically actionable, personalized drug treatment developments. To promote its application to the future drug testing studies, we have made available an open-source implementation of the TAS calculation in the form of a stand-alone R package.