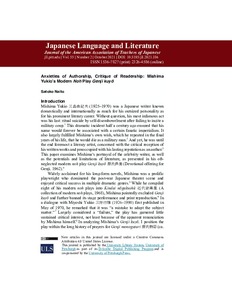 Mishima Yukio's dramatic suicide half a century ago ensured that his name would forever be associated with a certain fanatic imperialism, and largely fulfilled his own wish that he would die as a military man. And yet, he was until the end foremost a literary artist, concerned with the critical reception of his written works and preoccupied with his lasting reputation as an author. This paper examines Mishima’s portrayal of the celebrity writer, as well as the potentials and limitations of literature as presented in his oft-neglected modern noh play Genji kuyō (Devotional offering for Genji, 1962). It positions the play within the long history of prayers for Genji monogatari (The Tale of Genji, ca. 1008) that began in the twelfth century in response to the perceived ambiguous morality of the author Murasaki Shikibu (d. ca. 1014). Mishima's Genji kuyō provides a pointed criticism of readers, as well as anxieties regarding a writer's life and literary recognition. Though Mishima himself famously disowned it after its initial publication, Genji kuyō offers critical insights regarding the writing and reading of literature.