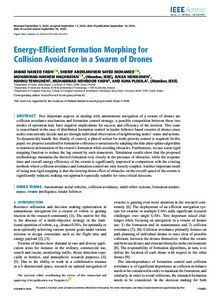 Two important aspects in dealing with autonomous navigation of a swarm of drones are collision avoidance mechanism and formation control strategy; a possible competition between these two modes of operation may have negative implications for success and efficiency of the mission. This issue is exacerbated in the case of distributed formation control in leader-follower based swarms of drones since nodes concurrently decide and act through individual observation of neighbouring nodes' states and actions. To dynamically handle this duality of control, a plan of action for multi-priority control is required. In this paper, we propose a method for formation-collision co-awareness by adapting the thin-plate splines algorithm to minimize deformation of the swarm's formation while avoiding obstacles. Furthermore, we use a non-rigid mapping function to reduce the lag caused by such maneuvers. Simulation results show that the proposed methodology maintains the desired formation very closely in the presence of obstacles, while the response time and overall energy efficiency of the swarm is significantly improved in comparison with the existing methods where collision avoidance and formation control are only loosely coupled. Another important result of using non-rigid mapping is that the slowing down effect of obstacles on the overall speed of the swarm is significantly reduced, making our approach especially suitable for time critical missions.