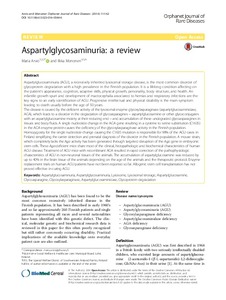 Aspartylglucosaminuria (AGU), a recessively inherited lysosomal storage disease, is the most common disorder of glycoprotein degradation with a high prevalence in the Finnish population. It is a lifelong condition affecting on the patient's appearance, cognition, adaptive skills, physical growth, personality, body structure, and health. An infantile growth spurt and development of macrocephalia associated to hernias and respiratory infections are the key signs to an early identification of AGU. Progressive intellectual and physical disability is the main symptom leading to death usually before the age of 50 years.The disease is caused by the deficient activity of the lysosomal enzyme glycosylasparaginase (aspartylglucosaminidase, AGA), which leads to a disorder in the degradation of glycoasparagines - aspartylglucosamine or other glycoconjugates with an aspartylglucosamine moiety at their reducing end-and accumulation of these undegraded glycoasparagines in tissues and body fluids. A single nucleotide change in the AGA gene resulting in a cysteine to serine substitution (C163S) in the AGA enzyme protein causes the deficiency of the glycosylasparaginase activity in the Finnish population.Homozygosity for the single nucleotide change causing the C163S mutation is responsible for 98% of the AGU cases in Finland simplifying the carrier detection and prenatal diagnosis of the disorder in the Finnish population. A mouse strain, which completely lacks the Aga activity has been generated through targeted disruption of the Aga gene in embryonic stem cells. These Aga-deficient mice share most of the clinical, histopathologic and biochemical characteristics of human AGU disease. Treatment of AGU mice with recombinant AGA resulted in rapid correction of the pathophysiologic characteristics of AGU in non-neuronal tissues of the animals. The accumulation of aspartylglucosamine was reduced by up to 40% in the brain tissue of the animals depending on the age of the animals and the therapeutic protocol. Enzyme replacement trials on human AGU patients have not been reported so far. Allogenic stem cell transplantation has not proved effective in curing AGU.