Is the effect of non-invasive ventilation on survival in amyotrophic lateral sclerosis age-dependent?

Is the effect of non-invasive ventilation on survival in amyotrophic lateral sclerosis age-dependent? 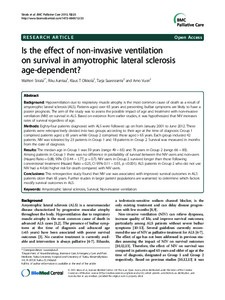 Hypoventilation due to respiratory muscle atrophy is the most common cause of death as a result of amyotrophic lateral sclerosis (ALS). Patients aged over 65 years and presenting bulbar symptoms are likely to have a poorer prognosis. The aim of the study was to assess the possible impact of age and treatment with non-invasive ventilation (NIV) on survival in ALS. Based on evidence from earlier studies, it was hypothesized that NIV increases rates of survival regardless of age.

Eighty-four patients diagnosed with ALS were followed up on from January 2001 to June 2012. These patients were retrospectively divided into two groups according to their age at the time of diagnosis: Group 1 comprised patients aged ≤ 65 years while Group 2 comprised those aged > 65 years. Each group included 42 patients. NIV was tolerated by 23 patients in Group 1 and 18 patients in Group 2. Survival was measured in months from the date of diagnosis.