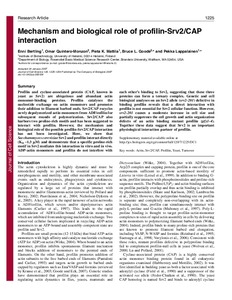 Profilin and cyclase-associated protein (CAP, known in yeast as Srv2) are ubiquitous and abundant actin monomer- binding proteins. Profilin catalyses the nucleotide exchange on actin monomers and promotes their addition to filament barbed ends. Srv2/CAP recycles newly depolymerized actin monomers from ADF/cofilin for subsequent rounds of polymerization. Srv2/CAP also harbors two proline- rich motifs and has been suggested to interact with profilin. However, the mechanism and biological role of the possible profilin-Srv2/CAP interaction has not been investigated. Here, we show that Saccharomyces cerevisiae Srv2 and profilin interact directly (K-D similar to 1.3 mu M) and demonstrate that a specific proline-rich motif in Srv2 mediates this interaction in vitro and in vivo. ADP- actin monomers and profilin do not interfere with each other's binding to Srv2, suggesting that these three proteins can form a ternary complex. Genetic and cell biological analyses on an Srv2 allele (srv2-201) defective in binding profilin reveals that a direct interaction with profilin is not essential for Srv2 cellular function. However, srv2-201 causes a moderate increase in cell size and partially suppresses the cell growth and actin organization defects of an actin binding mutant profilin (pfy1-4). Together these data suggest that Srv2 is an important physiological interaction partner of profilin.