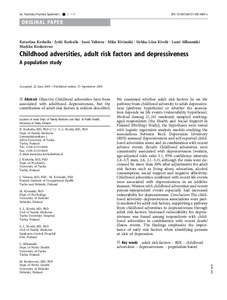 Objective: Childhood adversities have been associated with adulthood depressiveness, but the contribution of adult risk factors is seldom described. We examined whether adult risk factors lie on the pathway from childhood adversity to adult depressiveness (pathway hypothesis) or whether the association depends on life events (vulnerability hypothesis).