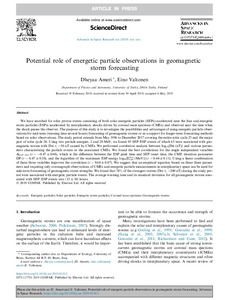 We have searched for solar proton events consisting of both solar energetic particles (SEPs) accelerated near the Sun and energetic storm particles (ESPs) accelerated by interplanetary shocks driven by coronal mass ejections (CMEs) and observed near the time when the shock passes the observer. The purpose of this study is to investigate the possibilities and advantages of using energetic particle observations for mid-term (warning time several hours) forecasting of geomagnetic storms or as a support for longer-term forecasting methods based on solar observations. The study period extends from May 1996 to December 2017 covering the entire solar cycle 23 and the major part of solar cycle 24. Using two particle energies, 2 and 20 MeV, we found 95 SEP–ESP events of which 65 were associated with geomagnetic storms with Dst ⩽ −50 nT caused by CMEs. We performed correlation analysis between log10|Dst (nT)| and various parameters characterising the particle events or the associated CMEs. We found the best correlations for the single independent variables  (ΔtESP-SEP (r =-0.47 ± 0.08 ), which is the difference between the ESP peak time and SEP onset time, the CME direction parameter DP (r = 0.48 ± 0.10), and the logarithm of the maximum ESP energy log10[ EmaxESP(MeV)] (r = 0.44 ± 0.11). Using a linear combination of these three variables improves the correlation (r = 0.68 ± 0.07). We suggest that an empirical equation based on these three parameters and requiring only coronagraph observations of CMEs and energetic particle measurements in interplanetary space can be used for mid-term forecasting of geomagnetic storm strengths. We found that 74% of the strongest storms (Dst ⩽  nT) during the study period were associated with energetic particle events. The average warning time and its standard deviation for all geomagnetic storms associated with SEP–ESP events was (15 ± 10)  hours.