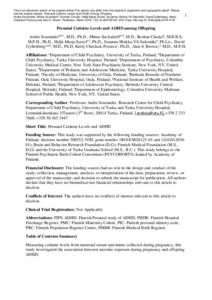 OBJECTIVES: An association between maternal smoking during pregnancy and offspring attention-deficit/hyperactivity disorder (ADHD) has been shown across several studies based on self-reports. No previous studies have investigated the association of nicotine exposure measured by cotinine levels during pregnancy and offspring ADHD.METHODS: In this population-based study, 1079 patients born between 1998 and 1999 and diagnosed with ADHD according to the International Classification of Diseases and 1079 matched controls were identified from Finnish nationwide registers. Maternal cotinine levels were measured by using quantitative immunoassays from maternal serum specimens collected during the first and second trimesters of pregnancy and archived in the national biobank.RESULTS: There was a significant association between increasing log-transformed maternal cotinine levels and offspring ADHD. The odds ratio was 1.09 (95% confidence interval [CI] 1.06-1.12) when adjusting for maternal socioeconomic status, maternal age, maternal psychopathology, paternal age, paternal psychopathology, and child's birth weight for gestational age. In the categorical analyses with cotinine levels in 3 groups, heavy nicotine exposure (cotinine level >50 ng/mL) was associated with offspring ADHD, with an odds ratio of 2.21 (95% CI 1.63-2.99) in the adjusted analyses. Analyses by deciles of cotinine levels revealed that the adjusted odds for offspring ADHD in the highest decile was 3.34 (95% CI 2.02-5.52).CONCLUSIONS: The study reveals an association with and a dose-response relationship between nicotine exposure during pregnancy and offspring ADHD. Future studies incorporating maternal smoking and environmental, genetic, and epigenetic factors are warranted.