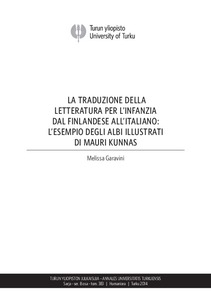 
Despite the increasing number of research on translating for children, no study has so far

taken into consideration the translations of children’s literature from Finnish into Italian. This

translations into Italian. Besides being the first research in the field analysing the shifts

between these two systems, the study thoroughly investigates the characteristics of the

translation process of picturebooks. The works chosen as case study are the Finnish

The dissertation establishes whether and how culture-specific elements (anthroponyms,

toponyms, food and allusions) and the word-image interaction have a significant impact on

the quality and the nature of the target works, and also whether these aspects are still

consistent after the translation and the adaptation process to the target system. Since

visual, it has been necessary to use a multimodal comparative analysis. Such a descriptive

undergone by Kunnas’s picturebooks translated into Italian. Indeed, it has helped to identify

system to the target one, to determine the most frequent translation strategies used to ensure a

higher degree of readability, and to establish whether particular translation choices have

contributed to modify the word-image interaction.

written text. Moreover, the findings of the analysis together with the interviews to the Italian

Finnish cultural specificity, even to the detriment of the aesthetic nature of the original