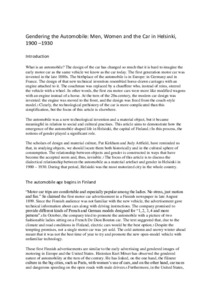 What is an automobile? The design of the car has changed so much that it is difficult to imagine the early motorcar as the same vehicle we know as the car today. The first-generation motorcar was invented in the late 1880s. The birthplace of the automobile is in Europe: in Germany and in France. The design of that new technical invention resembled a horse-drawn carriage with an engine attached to it. The coachman was replaced by a chauffeur who, instead of reins, steered the vehicle with a wheel. In other words, the first-era motorcars were more like modified wagons with an engine instead of a horse. At the turn of the twentieth century, the modern car was invented; the engine was moved to the front, and the design was freed from the coach-style model.1 Clearly, the technological prehistory of the car is more complicated than this simplification, but the focus of this article is elsewhere.