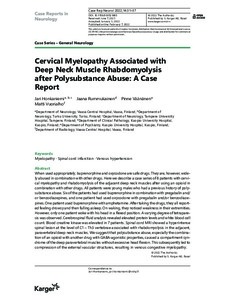 When used appropriately, buprenorphine and oxycodone are safe drugs. They are, however, widely abused in combination with other drugs. Here we describe a case series of 8 patients with cervical myelopathy and rhabdomyolysis of the adjacent deep neck muscles after using an opioid in combination with other drugs. All patients were young males who had a previous history of polysubstance abuse. Six of the patients had used buprenorphine in combination with pregabalin and/or benzodiazepines, and one patient had used oxycodone with pregabalin and/or benzodiazepines. One patient used buprenorphine with amphetamine. After taking the drugs, they all reported feeling drowsy and then falling asleep. On waking, they noticed weakness in their extremities. However, only one patient woke with his head in a flexed position. A varying degree of tetraparesis was observed. Cerebrospinal fluid analysis revealed elevated protein levels and white blood cell count. Blood creatine kinase was elevated in 7 patients. Spinal cord MRI showed a hyperintense spinal lesion at the level of C1 – Th3 vertebrae associated with rhabdomyolysis in the adjacent, paravertebral deep neck muscles. We suggest that polysubstance abuse, especially the combination of an opioid with another drug with GABA-agonistic properties, caused a compartment syndrome of the deep paravertebral muscles without excessive head flexion. This subsequently led to compression of the external vascular structures, resulting in venous congestive myelopathy.