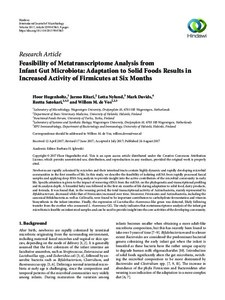 Newborns are rapidly colonized by microbes and their intestinal tracts
contain highly dynamic and rapidly developing microbial communities in
the first months of life. In this study, we describe the feasibility of
isolating mRNA from rapidly processed faecal samples and applying deep
RNA-Seq analysis to provide insight into the active contributors of the
microbial community in early life. Specific attention is given to the
impact of removing rRNA from the mRNA on the phylogenetic and
transcriptional profiling and its analysis depth. A breastfed baby was
followed in the first six months of life during adaptation to solid
food, dairy products, and formula. It was found that, in the weaning
period, the total transcriptional activity of Actinobacteria, mainly
represented by Bifidobacterium, decreased while that of
Firmicutes increased over time. Moreover, Firmicutes and Actinobacteria,
including the canonical Bifidobacteria as well as Collinsella,
were found to be important contributors to carbohydrate fermentation and
vitamin biosynthesis in the infant intestine. Finally, the expression
of Lactobacillus rhamnosus-like genes was detected, likely following transfer from the mother who consumed L. rhamnosus
GG. The study indicates that metatranscriptome analysis of the infant
gut microbiota is feasible on infant stool samples and can be used to
provide insight into the core activities of the developing community.