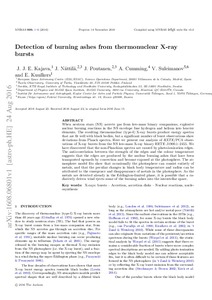 When neutron stars (NS) accrete gas from low-mass binary companions, explosive nuclear burning reactions in the NS envelope fuse hydrogen and helium into heavier elements. The resulting thermonuclear (type-I) X-ray bursts produce energy spectra that are fit well with black bodies, but a significant number of burst observations show deviations from Planck spectra. Here we present our analysis of RXTE/ PCA observations of X-ray bursts from the NS low-mass X-ray binary HETE J1900.1-2455. We have discovered that the non-Planckian spectra are caused by photoionization edges. The anticorrelation between the strength of the edges and the colour temperature suggests that the edges are produced by the nuclear burning ashes that have been transported upwards by convection and become exposed at the photosphere. The atmosphere model fits show that occasionally the photosphere can consist entirely of metals, and that the peculiar changes in blackbody temperature and radius can be attributed to the emergence and disappearance of metals in the photosphere. As the metals are detected already in the Eddington-limited phase, it is possible that a radiatively driven wind ejects some of the burning ashes into the interstellar space.