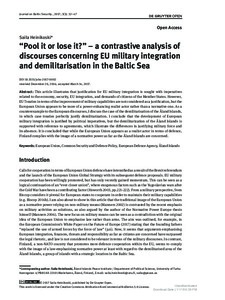 [Journal on Baltic Security] Pool it or lose it a contrastive analysis of discourses concerning EU military integration and demilitarisation in the Baltic Sea.pdf (1.062Mb)
Lataukset:

This article illustrates that justification for EU military integration is sought with imperatives related to the economy, security, EU integration, and demands of citizens of the Member States. However, EU Treaties in terms of the improvement of military capabilities are not considered as a justification, but the European Union appears to be more of a power-enhancing realist actor rather than a normative one. As a counterexample to the European discourses, I discuss the case of the demilitarisation of the Åland Islands, in which case treaties perfectly justify demilitarization. I conclude that the development of European military integration is justified by political imperatives, but the demilitarization of the Åland Islands is supported with reference to agreements, which illustrate the differences in justifying military force and its absence. It is concluded that while the European Union appears as a realist actor in terms of defence, Finland complies with the image of a normative power as far as the Åland Islands are concerned.
Keywords: