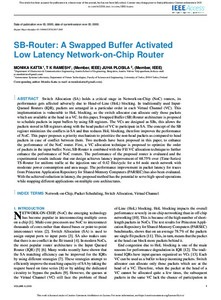 Switch Allocation (SA) holds a critical stage in Network-on-Chip (NoC) routers, its performance gets affected adversely due to Head-of-Line (HoL) blocking. In traditionally used Input-Queued Routers (IQR), packets are arranged in a particular order in each Virtual Channel (VC). This implementation is vulnerable to HoL blocking, as the switch allocator can allocate only those packets which are available at the head in a VC. In this paper, Swapped Buffer (SB) Router architecture is proposed to schedule packets in input buffers by using SB registers. The VCs are designed as SBs, this allows the packets stored in SB registers along with the head packet of VC to participate in SA. The concept of the SB register minimizes the conflicts in SA and thus reduces HoL blocking, therefore improves the performance of NoC. This paper proposes a priority mechanism to prioritize the non-head packets as compared to head packets in case of conflict between them. Two methods have been proposed in this paper, to enhance the performance of the NoC router. First, a VC allocation technique is proposed to optimize the order of packets in the input buffer. Next, SB-Router is combined with the Fill VC allocation technique to further enhance the performance of NoC routers. The performance of the proposed router is evaluated and the experimental results indicate that our design achieves latency improvement of 68.75% over (Time-Series) TS-Router for uniform traffic at the injection rate of 0.42 flits/cycle for a 64 node mesh network with moderate power consumption and area usage. The performance improvement in packet latency for traces from Princeton Application Repository for Shared-Memory Computers (PARSEC) has also been evaluated. With the achieved reduction in latency, the proposed method has the potential to serve high-speed operations while mapping different applications on multiple core architectures.