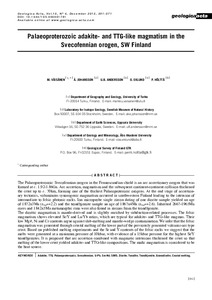 
The Palaeoproterozoic Svecofennian orogen in the Fennoscandian shield is an arc accretionary orogen that was formed at c. 1.92-1.86Ga. Arc accretion, magmatism and the subsequent continent-continent collision thickened the crust up to c. 70km, forming one of the thickest Palaeoproterozic orogens. At the end stage of accretionary tectonics, voluminous synorogenic magmatism occurred in southwestern Finland leading to the intrusion of intermediate to felsic plutonic rocks. Ion microprobe single zircon dating of one diorite sample yielded an age of 1872±3Ma (ε=+2.2) and the trondhjemite sample an age of 1867±4Ma (ε=+2.6). Inherited 2667-1965Ma cores and 1842±5Ma metamorphic rims were also found in zircons from the trondhjemite. The dioritic magmatism is mantle-derived and is slightly enriched by subduction-related processes. The felsic magmatism shows elevated Sr/Y and La/Yb ratios, which are typical for adakite-and TTG-like magmas. Their low Mg#, Ni and Cr contents argue against slab-melting and mantle-wedge contamination. We infer that the felsic magmatism was generated through crustal melting of the lower part of the previously generated volcanic-arc type crust. Based on published melting experiments and the Sr and Y contents of the felsic rocks we suggest that the melts were generated at a minimum pressure of 10kbar, with evidence of a 15kbar pressure for the highest Sr/Y trondhjemites. It is proposed that arc accretion combined with magmatic intrusions thickened the crust so that melting of the lower crust yielded adakite-and TTG-like compositions. The mafic magmatism is considered to be the heat source.