The type of the functional cardiovascular response to upright posture is associated with arterial stiffness: a cross-sectional study in 470 volunteers

The type of the functional cardiovascular response to upright posture is associated with arterial stiffness: a cross-sectional study in 470 volunteers 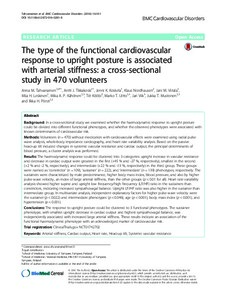 Background: In a cross-sectional study we examined whether the haemodynamic response to upright posture could be divided into different functional phenotypes, and whether the observed phenotypes were associated with known determinants of cardiovascular risk.Methods: Volunteers (n = 470) without medication with cardiovascular effects were examined using radial pulse wave analysis, whole-body impedance cardiography, and heart rate variability analysis. Based on the passive head-up tilt induced changes in systemic vascular resistance and cardiac output, the principal determinants of blood pressure, a cluster analysis was performed.Results: The haemodynamic response could be clustered into 3 categories: upright increase in vascular resistance and decrease in cardiac output were greatest in the first (+ 45 % and -27 %, respectively), smallest in the second (+ 2 % and -2 %, respectively), and intermediate (+ 22 % and -13 %, respectively) in the third group. These groups were named as 'constrictor' (n = 109), 'sustainer' (n = 222), and 'intermediate' (n = 139) phenotypes, respectively. The sustainers were characterized by male predominance, higher body mass index, blood pressure, and also by higher pulse wave velocity, an index of large arterial stiffness, than the other groups (p < 0.01 for all). Heart rate variability analysis showed higher supine and upright low frequency/high frequency (LF/HF) ratio in the sustainers than constrictors, indicating increased sympathovagal balance. Upright LF/HF ratio was also higher in the sustainer than intermediate group. In multivariate analysis, independent explanatory factors for higher pulse wave velocity were the sustainer (p < 0.022) and intermediate phenotypes (p < 0.046), age (p < 0.001), body mass index (p < 0.001), and hypertension (p < 0.001).Conclusions: The response to upright posture could be clustered to 3 functional phenotypes. The sustainer phenotype, with smallest upright decrease in cardiac output and highest sympathovagal balance, was independently associated with increased large arterial stiffness. These results indicate an association of the functional haemodynamic phenotype with an acknowledged marker of cardiovascular risk.